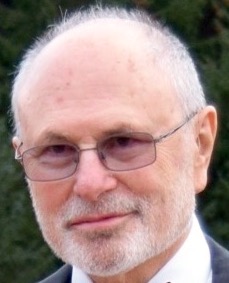 Allan R. Hoffman calls himself a lapsed physicist, a scientist who left the university classroom and laboratory to create public policies to meet the energy needs for the country’s people and infrastructure.

Now he weaves those teaching talents and policy expertise together to lead his first Encore Learning course, “Path to a Renewable Energy Future: History, Barriers, Potential.” He sees a renewable energy future, but calls the path winding.

“We’re moving in that direction now,” he said, even though the U.S. no longer recognizes the Paris Accord. “(The pace) can slow down, but you can’t stop Jerry Brown (governor of California), New York City, other cities and the other countries in the Paris Accord. The transition is inevitable.”

Off-shore wind power is developing rapidly. “There’s good off-shore wind, good technology, and the country is blessed with four different coasts,” he said. The United Kingdom today creates the most off-shore wind energy, and China, with a long shore line, is next. Land-based wind energy is cheaper, but the parts needed for turbines bigger than about 3 megawatts in size are too big to transport on land. Offshore, he points out, “Winds are faster, they are more steady, and there’s no limit to size of equipment. If you double the wind speed, you get eight times the amount of energy.” The off-shore oil industry is already helping to build floating ocean platforms for wind energy production.

Hoffman’s own career path was winding. While teaching and running a laboratory at the University of Massachusetts at Amherst in 1969, he agreed to monitor a meeting of residents opposed to a nuclear plant in Vermont for a friend who couldn’t attend. (That plant was built but is now scheduled to close.) Hoffman knew about nuclear fission but not how it was used, and to expand his thinking he began teaching a science course for non-science majors and exploring how the country could meet its energy needs.

“I came to Washington one week after Nixon resigned,” said Hoffman. His role: to help advise a technically deficient Congress on science issues in a time when the Arab members of the Organization of Petroleum Exporting Countries (OPEC) had embargoed oil, and gas prices were soaring. 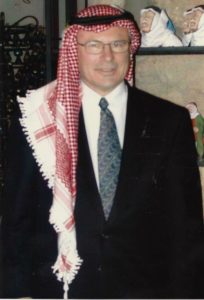 In the Middle East

“My first assignment was to figure out how to set up a rationing system for gasoline. I talked to those who had been through rationing in World War II , and it soon became clear that we couldn’t do it now for political reasons. The second assignment was to figure out how to reduce oil imports. We realized that just three factors were involved in gas consumption: the number of cars we have, how much we drive and the fuel economy of the fleet. It quickly became clear that we couldn’t limit the number of miles traveled, as the House voted down any increase in the federal tax on gasoline.

“Walking back to the office after the House votes, I realized that we couldn’t take cars off the roads or limit driving, and that there was only one thing that could change.” Thus was born the Corporate Average Fuel Economy (CAFE) standards. Hoffman wrote the legislation – his first — which required the reluctant automakers to increase the gas mileage of new car fleets. Congress enacted it in 1975. Since then, the National Highway Transportation Safety Administration estimates a savings of more than 60 billion gallons of gas.

Hoffman was involved with renewable energy when it was first considered under the Carter administration. It fizzled in the Reagan administration, when budgets were cut. Interest rose and fell at different points in the Clinton and Bush administrations; too often political decisions failed to support its development.

Nonetheless, Hoffman was there to help direct focus on energy that was getting increasingly inexpensive, accessible, environmentally preferable, and renewable. His career included senior positions at the National Academy of Sciences and International Energy Agency. At the U.S. Department of Energy (DOE) he headed the department’s renewable energy electricity programs (solar, wind, geothermal, biomass, hydropower, ocean, energy storage, hydrogen, superconductivity).

Now, renewable energy sources – biomass, geothermal, hydropower, solar (including small-scale photovoltaic) and wind – accounted for 19.35 percent of U.S. electrical generation in the first quarter of 2017 and exceeded expectations and records, according to the U.S. Energy Information Administration. 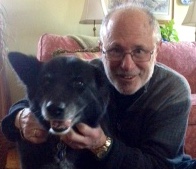 With his beloved dog, Illy

The lapsed physicist no longer maintains a 9-5 schedule, having retired from DOE in 2012, but his involvement in the issues of renewable energy continues. He writes a blog on energy issues, wrote a book, “The U.S. Government and Renewable Energy: A Winding Road,” and contributed to several others. He is involved in the planning of several large solar energy projects in Zambia. Still interested in science education, he serves as an advisory council member of the Children’s Science Center in Northern Virginia and includes a series of science books for young students on his bucket list. Come October, he’ll add the title “Instructor, Encore Learning,” to his bio. 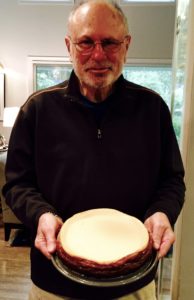 Hoffman has always been an avid amateur photographer – he claims his 13 1/2-year-old canine may be the most photographed dog in the world – and for many years has been an enthusiastic cook and baker. You can check his blog (lapsedphysicist.org) not only for his thoughts on renewable energy but for his cheesecake recipe, too.