Would you like to learn how to build a small robot? Program LED circuits and small electronic motors? These skills will be part of a new Encore Learning course, Internet of Things: Explore the Basics to Understand the Future of Smart Cities, taught by Jim Egenrieder.

“I’m always attracted to new audiences who help me think differently and develop new teaching and learning strategies,” he said. He hasn’t been disappointed. “I’m fond of telling those who might consider teaching for Encore Learning that I’ve never made it through an entire teaching plan, that the discussion takes over. I’m not the sage on the stage. These folks are a sophisticated audience who have found the time to read things that are still on my ‘to read’ list.”

Jim is looking forward to his new course. “I really love the idea of an Encore Learning course in this area,” he said. “I know how influential older adults can be in guiding the younger generation into future careers in STEM (Science, Technology, Engineering and Math). Grandparents, aunts, uncles, and neighbors play an important role with the younger generation because they can provide ideas and feedback without judgement.”

Jim saw a similar influence in his own life. His father worked as a systems manager and while he hadn’t gone to college, he was able to teach computer science in graduate school because of his work experience.

As a Boy Scout, Jim won the outstanding student trophy at an Environment and Science Camp in Dauphin, PA. The Hunting and Fishing Club from his father’s workplace paid for Jim to go to the state competition at Penn State. 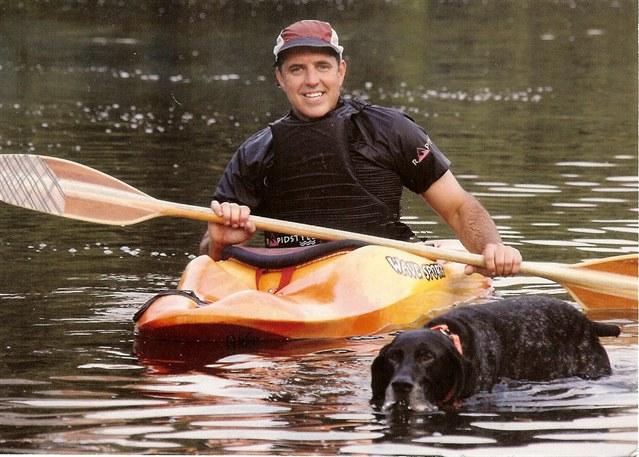 Jim’s equally at home outdoors or in the classroom.

“I was 15-years old,” he recalled. “Penn State was the only college I ever visited and the only college I applied to.” In 1986, he earned his B.S. in Wildlife and Fisheries Science at Penn State’s School of Forestry and Agriculture. He worked in agriculture-related jobs on Capitol Hill until 1998 when he began the Master’s program in Science and Math Education at Virginia Tech. After receiving his Master’s, he enrolled in VT’s Doctoral Program in science education and STEM education program evaluation. While earning his doctorate, he worked in the master’s program. He’s been involved in education ever since.

Jim has taught in Arlington and Fairfax schools and was among the first to formally integrate secondary science and technology courses. He has worked for local and state agencies to coordinate STEM education outreach. He helped develop the National Institute for Aerospace Center for Integrative STEM Education. 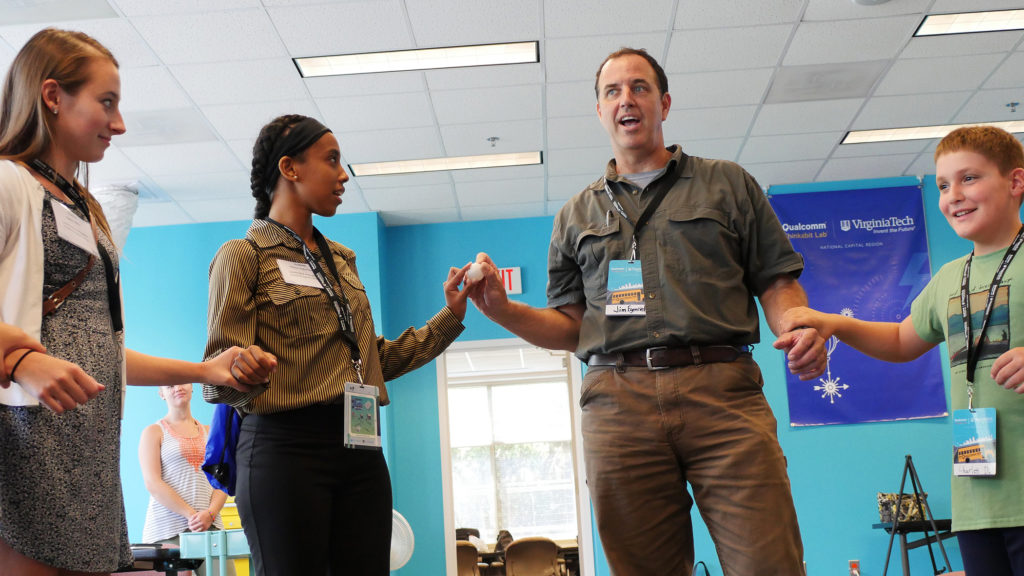 Jim building a human circuit with students at the Qualcomm-Virginia Tech Thinkabit Lab.

Since June 2016, he has been Director of the Qualcomm-Virginia Tech Thinkabit Lab in Falls Church, VA. Students ranging from rising first graders to college students study at the lab. This fall, Encore Learning students will join that group. It’s the first Encore Learning class at this location.

Jim would like to see the education integration started by STEM go further. “We should be integrating other subjects to see them in context. Context changes the way we think about everything,” he said, “Why aren’t art teachers dedicating at least a small part of their class to technical drawing? Why aren’t music teachers including digital music? History and social studies teachers using spreadsheets to analyze data?,” he asked, “And why don’t STEM teachers consider the historical influence on their subject?”

On the research farm with friend Truman.

Does Jim have any free time and how does he spend it? Yes, he’s a SCUBA and mixed gas diving instructor. On weekends, he and his wife Diane Allemang, who works in global agriculture systems, get away to their 23-acre research farm on the South Branch of the Potomac near Green Spring, WV. As a child, Jim spent many weekends at the farm where his father spent his childhood; however, this farm is different. At their research farm, Jim and Diane work with vegetation, tree genetics, tree growing and deer protection systems. They’ve designed a butterfly wetland. They’ve grown milkweed for schools’ life science projects. Still, Jim finds it relaxing. “The farm work uses a different part of the brain,” he said, “and I get to use get to use heavy equipment, like tractors, loaders, backhoes, and excavators.”