Elizabeth Shelton can trace her interest in a State Department career to grammar school. “In the eighth grade, we were asked what we wanted to be,” she recalled. “I said I wanted to be a diplomat. I have no idea where that came from, but I was already interested in international things.” 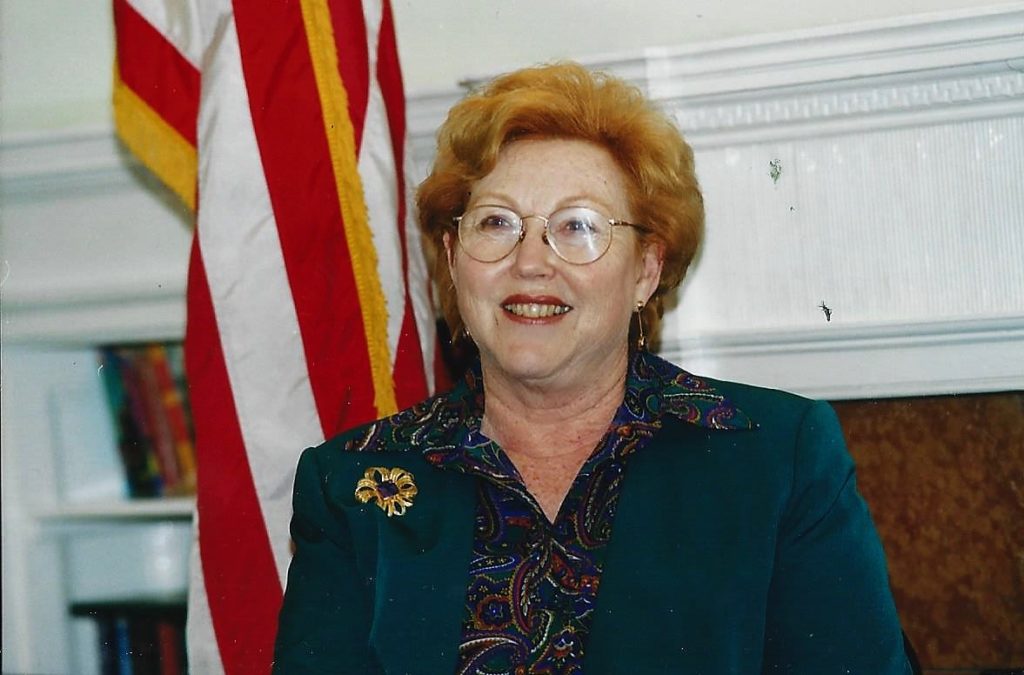 Her love of Washington, DC also goes back to her youth. As a high school junior, the Ann Arbor, MI native spent Easter vacation with her aunt who lived across from the National Cathedral. “It was winter in Michigan, it was spring here. I was blown away. I fell in love with the city. It was beautiful, it was exciting. Now I’ve lived all over the world, but Washington is my home.”

She took the Foreign Service exams her senior year in college. “I received ‘Congratulations, your name is on the list.’ I didn’t have a clue what that meant. How many people were on the list? What number was I?”

In August of 1962, she recalls that two momentous things happened. “I came here to stay with my aunt and look for a job. That Sunday, I went to church with my aunt and met Napier, the man who would become my husband. Tuesday, I got a telegram from the State Department offering a job.”

After a year of training, Elizabeth was off to Bangkok. Napier remained in DC, where he worked for the National Park Service. “I said to Napier, if you want me, you know where to find me. Eventually, he came and we were married in Bangkok in 1964. Then I had to resign from the State Department because in those days, women officers could not be married.”

They moved to Ann Arbor where Napier earned his doctorate and they had three daughters. In 1971, the family moved to DC and Napier returned to the National Park Service. Elizabeth earned her Master’s in International Economic Development at American University.

“The State Department was like night and day in terms of the treatment of women and the makeup of the Foreign Service,” she commented. “What had been a bastion of white males from East Coast universities was totally transformed. Affirmative action had opened career paths to many people. For once, we were more representative of what the U.S. actually was.”

Elizabeth had changed as well. With her Master’s, she returned to the Foreign Service as an economist; an economist with a husband and three daughters. Napier was one of the first State Department husbands. He wrote articles for the Wall Street Journal and various magazines. When the girls’ schooling required it, he returned stateside with one or all of them.

Elizabeth served in Malaysia, Nigeria, Turkey, Azerbaijan and Albania. “I wanted to go somewhere where I could learn something and make a difference,” she said. “I was mostly in smaller, developing countries.”

While in Nigeria, she met informally with young economists — professors, editors, and others from the private sector — a group that grew to 50 people, often sitting on her floor. She brought some to the U.S. to meet with American economists. As the group was still developing, she extended her assignment for a third year. By the time she left, the group had become an official organization.

Her following assignments planted the seeds for her upcoming Encore Learning course. “Once I entered the Ottoman Empire with my assignment in Istanbul, I never left.” she said. “Azerbaijan and Albania are bookends of the Ottoman Empire. Turkey was a more open society. I did a lot of entertaining. I enjoyed bringing people together.” While stationed in Adana, a shooting war was in progress. “We still travelled. No one else did.”

While serving, she earned her M.S. in National Security Strategy from the National War College at the National Defense University in 1998. After retiring in 2005, she began working on her Ph.D. in Liberal Studies at Georgetown University. It was an interdisciplinary degree, meaning Elizabeth put all related information together for her dissertation “Faith, Freedom, and Flag: The Influence of American Missionaries in Turkey on Foreign Affairs, 1830-1880”.

“I included Ottoman history, Turkish history, European history, early American religion, Islam, early American education and philosophy — it was a wide swath,” she said. She finished in four years and planned to start teaching. “Then, I started giving lectures for the State Department and discovered the whole world of continuing education. I’m absolutely devoted to the concept, keeping the brain expanding.”

Elizabeth learned about Encore Learning when they called and asked her to give a lecture. “I was extremely impressed when 150 people attended the lecture,” she said. This semester’s class, Ottoman Empire’s Breakup, 1800-1923, is her first full Encore Learning course although she did lecture on Turkey as part of the Global Hot Spots course in the spring. She has also taught for the Chautauqua Institute in New York. “I really enjoy adult education because the audience is interested and interesting. We have good discussions,” she said.