Tom Wukitsch learned computers, mastered several ancient and romance languages, served in the Navy and became a Foreign Service Officer, holding posts in Europe, the Middle East and Washington. But wherever he was, whatever he was doing, Ancient Rome was his passion. 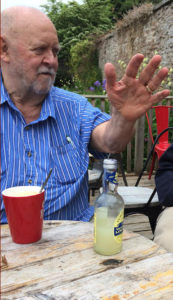 His interest had begun early – reading National Geographic as a six-year-old at his grandmother’s in Chicago. At that age, he asks, “Who doesn’t want to be a Roman emperor?” In his retirement, he balances that desire to learn about Roman times with an appetite to share. He has taught one of a variety of Ancient Rome courses each semester since Arlington Learning in Retirement Institute, the predecessor to Encore Learning, began in 2002.

This semester the course is Crusades – Wars Among Christians and Muslims, a 10-session course. His other courses included ancient Rome, medieval Rome, Renaissance Rome, ancient Egypt, Pompeii and Vesuvius, and Carthage and North Africa. He has led members of our Travel Club on private tours to Rome, Florence, Venice and Egypt. 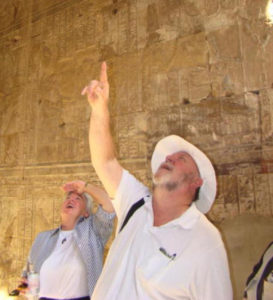 Although besotted by the ancient world, Tom had an early introduction to the world of the future: computers. Still in high school, he took a job in California as a gopher for Admiral Grace Hopper, a pioneer in computer programming. He entered Loyola to study early ancient history, focused on math and then, at the University of Chicago, archaeometry, which uses computer design to enhance archaeological discovery. He did “shovel bumming,” as beginning archeological work is described, dating pottery in a tent full of equipment that now is the size of a fountain pen. Then he decided he needed to make money.

Tom took the family path into the Navy, which introduced him to flying and brought him back to his love of ancient Rome. Assigned to Naples as an admiral’s aide, he had plenty of time to explore and volunteered at the archeological museum for a year. He was there when the Navy needed an archeologist to study underwater cities near Naples and assure that the Navy wouldn’t harm them as they shipped in new electronic equipment in newer, heavier vessels. 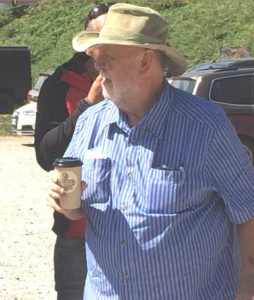 His next assignment was the NASA research station at Moffitt Field in California. Although he was too tall to be a real astronaut, he was placed in the astronaut corps which was testing to see if planes that could go higher than the atmosphere and come back to earth without falling apart. Tom thought he was invincible, but his knees and a broken back still tell him he wasn’t.

He worked for a defense contractor briefly, until a friend encouraged him to take the Foreign Service exam. He knew ancient languages, Italian, German and French – thanks to growing up in a multilingual family where everyone was also good in math and music. He passed, and, as a new junior political officer, headed to Damascus, where he could speak Arabic and was back in the archeological world of the Middle East. He learned the Syrian archeological sites, and was glad to show them to many visiting Congressmen. 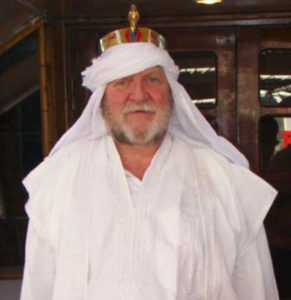 In Jerusalem, he became the “outside” Arabist in the West Bank, learning and reporting on the Gaza and various sects in the area. Back at State Department he headed the offices of Middle Eastern and European analysts and married another foreign service officer, Margaret Dean. They, and her son, went to Tel Aviv for three years, where they had another son. Tom spent his time learning about the nearby villages and winning reporting awards. He also had an opportunity to work with a Harvard scholar in Jordan identifying the archeological sites of photo plates made in the 1800s. The family then returned to Washington, where they finally were able to adopt a three-month-old Columbian girl. 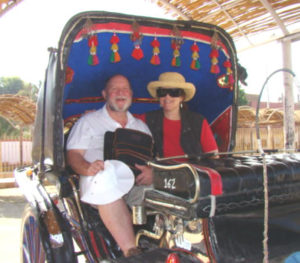 Tom and Margaret in Egypt.

Tom spent nine years in Washington in intelligence and research on the Middle East and Europe as a planning advisor on weapons of mass destruction and global warming for the Secretaries of State and Defense. After a back-breaking fall at the Pentagon, he retired. Margaret’s next assignment was Rome, and Tom was in his archeological element once again. He became the unofficial guide for embassy and VIP field trips – first on crutches, then two canes and finally one cane. He studied archeology, worked with Groupo Archeologica, and taught.

His return to Washington coincided with the beginning of ALRI, which became Encore Learning. He taught that first semester and every semester since, appearing each time at the class preview in his trademark shorts and sandals. Tom confesses he never has been a coat-and-tie person, even when he worked at the Pentagon. Once he was called in to brief Secretary of State George Schulz. Though questioned about his dress — khakis, no tie and a cardigan, Tom went in for the briefing and found Schulz tieless at his desk wearing khakis and a moth-eaten cardigan. “George, you’re overdressed,” said Tom. They had a good laugh, and a good briefing.